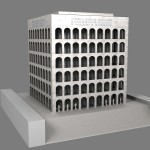 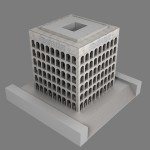 low-mid poly 3d model that I realized for Celda srl.

The Esposizione Universale Romana or EUR for short is a suburb, about 20-minute ride away from Rome, built by Italy’s infamous dictator Benito Mussolini as a site for the 1942 world’s fair to celebrate the twentieth anniversary of Fascism and the beginning of the Fascist era.

The palace is entirely clad in travertine marble, as is characteristic of buildings in the EUR. It is a parallelepiped on a square base, with six levels rising above a podium. The scale is imposing: the base covers an area of 8,400 square meters, and the building has volume 205,000 cubic meters with a height 68 meters.

Because of its bold appearance and iconic status, the building has appeared in a number of films, including The Last Man on Earth, Hudson Hawk, Titus and Equilibrium.

From October 22, 2015 this monument has become the new headquarter of the famous fashion brand Fendi.

Houdini and his “secret Language”

If you have recently approached Houdini, one of the first questions is what does VOP, VEX, SOP, DOP mean? Some people call them contexts, and technically they are a way to distinguish between types of Read more…

Golaem – contraints a rope to entities

Hi there! Developing a shot for my own personal sci-fi project I encounters some difficulties to figure out … how I can do that? The shot mainly show some miners/slave that pulling a floating cargo, Read more…

Hi there, in the following video there is playblast I did some days ago using Golaem (Autodesk Maya), this test is focused on using Golaem’s force to interact withe the crowd. The behaviors I set Read more…