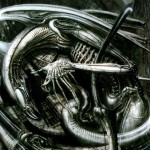 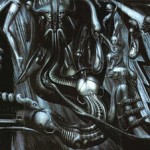 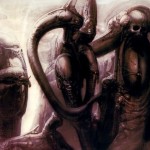 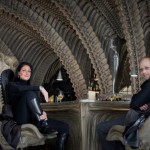 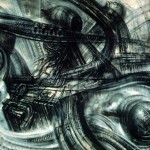 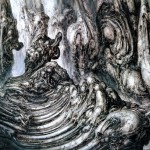 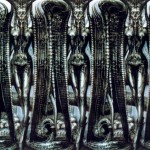 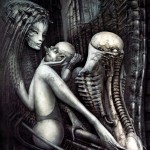 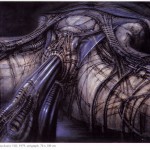 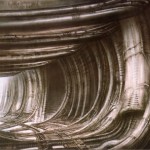 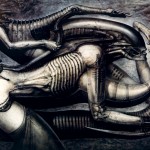 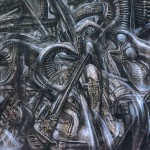 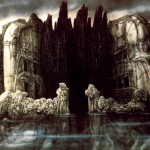 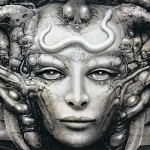 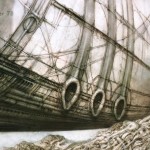 The artwork of Hans Rudolf Giger is a psychosexual pick-and-mix of lust and loathing. Best known as the Oscar-winning designer for Ridley Scott’s 1979 ‘spam-in-a-can’ sci-fi shocker, Alien, H. R. Giger is the artist your mother warned you about. His bloodless, monochromatic world is characterised by orifices, labial, anal, mechanical; by phalluses lethal with teeth; with pox-ridden babies and pentagrams; with machines hewn from cartilage and bone.  Giger’s view of flesh is not the glistening pink of the pornographer, but rather the waxy shine of the embalmist – worse, these are necrophiliac dreams – or nightmares more accurately.  As an ‘artist’, Giger is disparaged and dismissed – a one-trick pony and probable misogynist – and yet, the popularity of his work is undiminished, his design for the Alien unsurpassed in terms of true ‘other-worldliness’.

The twentieth century, characterized by staggering technological progress that enslaved modern humanity in an internecine symbiosis with the world of machines. In the course of the twentieth century, modern technological inventions became extensions and replacements of our muscles, our nervous system, our brain, our eyes and ears, and even our reproductive organs, to such an extent that the boundaries between biology and mechanical contraptions have all but disappeared… H.R. Giger R.I.P.

Hi there, due I’m closing this shot for the Golaem Academy 2 , I wish to share a little breakdown of the work involved on this shot . The rig – I created a really Read more…

Houdini and his “secret Language”

If you have recently approached Houdini, one of the first questions is what does VOP, VEX, SOP, DOP mean? Some people call them contexts, and technically they are a way to distinguish between types of Read more…

Golaem – contraints a rope to entities

Hi there! Developing a shot for my own personal sci-fi project I encounters some difficulties to figure out … how I can do that? The shot mainly show some miners/slave that pulling a floating cargo, Read more…